APC9K Weapon Storage Rack – B&T USA won the US Army contract for a small submachine gun in 2019. With the Army now fielding the new APC9Ks, the call to meet AR 190-11 and store them properly  can be answered with Combat Weapon Racks.

The APC9K uses a closed-bolt blowback system with a maximum rate of fire of 1,080 rounds per minute, and weighs just 5.9 pounds with 30-round magazine, foregrip, and Aimpoint micro red dot aiming sight. It’s chambered in 9-millimeter Parabellum and comes standard with two 30-round translucent magazines.

The APC9K has a side folding stock for compact carry and features a 4 position Picatinny rail system on the barrel shroud. The APC9K can also mount suppressors and are fully ambidextrous.

APC9Ks will be used to arm Army Personal Security Details. PSDs are assigned to senior leaders and staff to protect them from insider attacks in friendly territory, enemy forces in war zones, and various other threats. Soldiers assigned to PSD units spend a great deal of time indoors or inside vehicles and helicopters, relying on a compact weapon that can be quickly brought into action.

With the compact size of this new subgun, Combat Weapon Storage Systems fully slotted back panel and individually adjustable barrel saddles allow for reconfiguration of barrel saddle height settings for efficient APC9K weapon storage. Utilizing various height weapon racks, APC9Ks can be stored vertically, 12 or 14 weapons per vertical tier with up to 3 tiers of the subguns in our 85″ H full height Combat Weapon Racks.

Adjustable weapon holders work to secure the front and back of each weapon buttstock properly storing the APC9K with individually adjustable barrel saddles.

All products and services are available on GSA Schedule (GS-07F-0661W) to the US Federal Government and to state and local agencies. 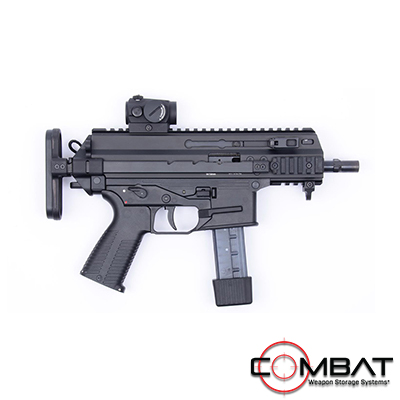 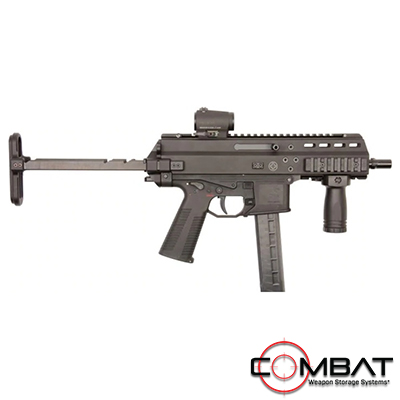 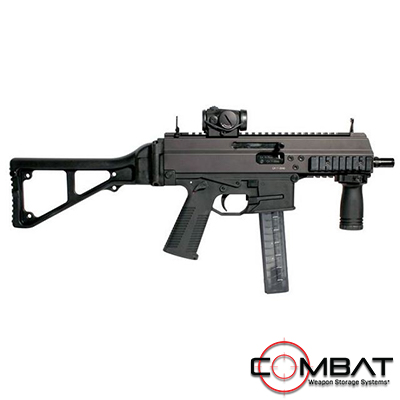 Below is a list of rack configurations awarded National Stock Numbers storing APC9Ks.

APC9Ks are available with many variants including standard barrel lengths, folded stocks  to military units around the world as well as law enforcement agencies, intelligence agencies and many private security organizations. With APC9Ks having fixed stock and collapsible stocks, several versions of APC9Ks exist in the marketplace. Combat Weapon Storage Systems feature a fully slotted back panel with individually adjustable barrel saddles allowing for armorers to adjust the height setting for each weapon’s barrel support based on the height of the weapon.

Fixed stock and collapsible stock APC9Ks can be stored side by side with independent barrel supports. Adjustable weapon holders work to secure the front and back of the buttstock ensuring the weapon has no lateral movement while being stored.

APC9K Weapon Racks are available on our GSA schedule GS-07F-0661W as a woman owned small business set aside.

Please give us a call for GSA pricing 800-699-1191 and to go over your storage requirements for your armory.